The docking stand also allows complete access to the rear cargo door while mated to the C-5 there-by enabling the removal of the cargo door and loading ramp. The stand has specially designed mechanically actuated sliders. Time for docking and de-docking is minimized through both the mechanized sliders and the stands self-propelled capabilities. The overall design of the stand fits well with the Air Force’s emphasis on Lean Systems. Click Here To Read More About Lean Manufacturing. 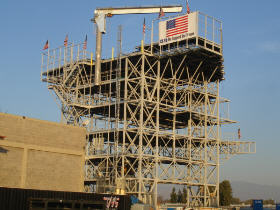 View an article from the Air Force’s AFOPO publication on this subject.

This selection resulted in Kern Steel being selected as the “Best Value” and most technically competent contractor. This is the second job that Kern Steel has done for the Air Force. The first was the repair of a C-5 Wing and Fuselage Dock for the Air Force at the Travis Air Force Base in California. Kern Steel was able to finish the job a full month ahead of schedule.  To find out more click on link below.

The C-5 aircraft is one of the largest aircrafts in the world. It can carry outsize and oversize cargo intercontinental ranges and can take off or land in relatively short distances. Ground crews can load and off load the C-5 simultaneously at the front and rear cargo openings. Other features of the C-5 are: 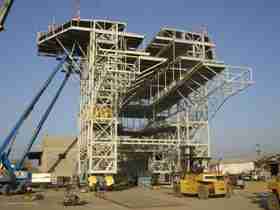 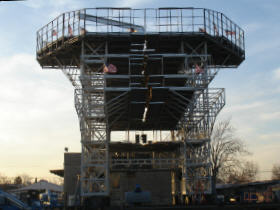 A proud part of the Kern Steel family of companies